History of the Lake

HomeAbout the FLCAHistory of the Lake

History of the Lake 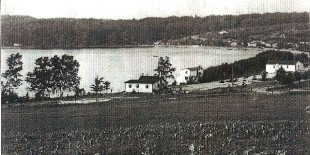 Prior to the arrival of European explorers, the Wendat First Nation peoples inhabited the area. The Wendat people fished the lake, hunted around the lake, and planted maze (corn) for the families that lived in the Wendat village of Ouenro. Early European settlers cleared only enough land to provide their own crops or lumber; little was left over for sale or trade.

The lake’s name has an uncertain origin dating back to the early 1800s. It is speculated that lake may have been named after the original property owner in the area. James Farlinger was a Drummond Island Voyageur was a blacksmith at the British military garrison in Penetanguishene. He owned two properties on the lake between 1846 – 1855. It is believed that James Farlinger’s name was anglicized in the record books and the lake was referred as Farling Lake.

In the 1881 Belden Atlas of Simcoe County, the lake is identified as Farlain Lake. It was officially named Farlain Lake in 1956 by the Ontario Geographic Names Board.  During the period 1875 – 1915, timber from the area was removed to supply the C. Beck Lumber Company in Penetanguishene. The majority of land around the lake was part of three large farms owned by the Quesnelle and Cook families. Many local people referred to the lake as Cook’s Lake and still do.

Over 200 registered lots surround the Lake providing enjoyment to both permanent and seasonal residents. The majority of the land was originally part of three large farms. One was the Quesnelle farm, which fronted on the 16th concession and ran back to include the south end of Farlain Lake. The other 2 farms, which included the whole west side and the north end, were owned by the Cooks, which explains why many locals have called it Cook’s Lake.

The Quesnelle property remains in the family but ceased to be an active farm a few decades ago. It was the first to sever off cottage lots and so the recreational use of the south end began in the 1920s. By the 1930s there was a population sufficient to support Moon’s Place, a combination convenience store/dance pavilion located on the south end of the Lake, which was also the site of many euchre parties and general good times. Moon’s Place and all other commercial ventures have long since disappeared from the lake. 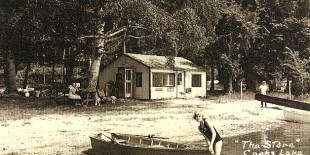 The north Cook farm, a 400 acre general farm since the 1870s, was sold in 1945 to a Mr. Taylor, who used it as a recreational property and as an investment. In the ’50s he created cottage lot developments, sold many lots and built on others to rent out as summer places. When he died in 1959, he willed the remaining property to Millie Allport, who gradually sold the rental cottages, usually to long-term tenants. Millie lived in the original Cook farmhouse, and on the six acres still in her possession she kept four palomino horses until ill health forced her to give up the farm in 1995. Many children on Farlain Lake got their first thrilling horseback ride on Honey Bee, who lived for all but two of her 32 years on the shores of the Lake.

The Cooks purchased the 300-acre south farm in 1900 from the Georgian Bay Lumber Company. In 1928, David Pratt, of Midland, purchased it as a hobby farm. He had “caretakers” work the farm and did extensive reforestation and major excavation work to create a series of ponds out of the original one so that he could raise trout for sport fishing. In 1935, his son Lorne built a summer house on a point of land about the middle of the farm’s shoreline but as time went on it was rarely used. Because it sat alone amidst a mile of forested shore, the youngsters on the lake came to think of it as “the haunted house.” They saw it as a test of courage to enter it and it became great fodder for their campfire stories. 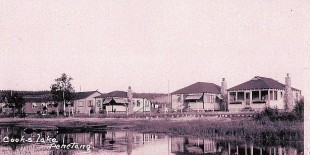 Original Cottages on Andrew Drive at South End of Lake

In 1969, the farm was divided and sold. The original 1911 farmhouse and 235 acres went to the Polish National Union, who used it for recreational purposes and the remainder went to a developer, who began the 90-cottage lot development known as Wildwood Estates. In 1986, the Polish Club sold the farm, but retained 10 acres on the south side of the 17th Concession and built a new clubhouse on the shore. The current owners of the farm, the Sweenies, regret to say that there are no trout left in the ponds!

In the ’90s, a proposed development of the north tip of the lake (the underground drainage end) and the Gypsy moth invasion caused the reactivation of the cottagers’ association to deal with these environmental concerns. The association succeeded in having strict environmental protection rules put in place on all remaining building lots and future development. The association has also served as a forum for information addressing a variety of concerns both specific to our lake and to the Township as a whole.