The latest invasive species for our community to deal with! The FLCA has been monitoring the infestation which started in 2019 and is now in the third year of what is reportedly a three year cycle. This year appears to be the worst.

Over the course of the summer of 2020, the FLCA gathered information, conducted surveys, shared the results with the SSEA, and arranged for a presentation by Michelle Hudolin of the SSEA at the virtual 2020 AGM. Information on strategies to deal with the infestation at various stages of the moth’s life cycle (see below) has been shared with members. We participated in educational webinars and in discussions regarding management strategies and the possibility of aerial spraying either by the Township of Tiny or privately.  Click on the following links for information about this invasive species and the current cycle:

A survey map of infestations on the MNRF page re the Lymantria dispar dispar shows those areas in and around Tiny Township as being moderate to severe in 2019 and again in 2020 based on the MNRF assessment. Based on our members’ observation of the high volume of egg masses  attached to the trees in the highly wooded areas around the lake in the fall of 2020,  2021 could be the worst. Many of the trees affected are the very tall, old trees near the shoreline which have already been highly stressed as a result of sitting in water for some years now. There is a virus that is potentially harmful to the caterpillars which had some impact in 2020.   Although extremely cold temperatures over the winter can have an adverse affect on the population for the following year, the winter of 2021 was milder with less snow than previous years. 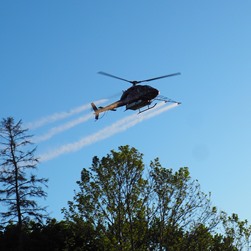 The most effective control when there is an outbreak as we have seen is the application of an aerial spray. The product used is Bacillus Thuringiensis Kurstaki (BtK), a naturally occurring soil bacteria which attaches to the leaves and is then ingested by the caterpillars, causing them to stop eating, suffering death by starvation or by blood poisoning. It is a biologically friendly product, used all over the world, since the early/mid 80s, registered & approved for use by the Pest Management Regulatory Agency of Health Canada (PMRA) for residential use. It is not harmful to human, animal, bird or insect health and is considered low risk under the Ontario Pesticides Act.

Some municipalities such as the GTA  implemented broad aerial spraying across the area. The Township of Tiny follows the recommendations coming from Simcoe County Forests and the SSEA with respect to the management of these invasive species. Neither the SSEA or Simcoe County Forests recommended broad spraying within the Township and considering that, existing Township By-laws re spraying and the potential cost, the Township did not support municipal spraying.  Organizing aerial spraying privately poses a number of challenges for property owners including working around those property owners not wanting any spraying, the requirement for obtaining waivers for over spraying on neighbours’ properties, the need to contract individually with the applicator. The fact that not all properties in an infested area reduces the effectiveness of the application.  The Township did however waive the restriction on over spraying on public land to make private contracting by property owners with a sprayer such as Zimmer Air more accessible. 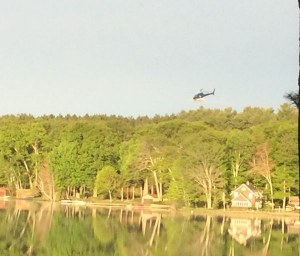 Private property owners around Farlain Lake, with the help of the FLCA, contracted with Zimmer Air for aerial spraying. Signs were posted around the lake on May 24 by Zimmer, indicating the estimated range of dates for the two applications to be May 26-June 10. Generally, the areas to be sprayed include shoreline properties on the entire east side of the lake, clusters of mostly shoreline properties along the northwest, west, and southwest sides and a few along Andrew Drive on the south end.

Good news – the first of two applications took place on Monday May 31 with the second application expected around 10 days later.

Many thanks to FLCA member Mark Kirk for working with Zimmer and leading the organization of the private spraying along with fellow members Bill Sweenie, Herb Huck, Scott Dale and Bruce Fligg. 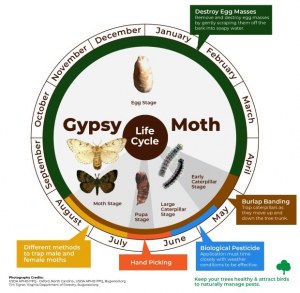 The battle to manage the moth doesn’t end with the spraying. Although it is very effective, aerial spraying is only one component of the management strategy. It’s important to continue dealing with this invasive pest throughout the season and the life cycle of the moth as well. SSEA has published a fact sheet available for downloading entitled SSEA Fact Sheet re European-Gypsy-Moth.

The diagram shown here depicts the life cycle of the moth and corresponding strategies for each stage of the cycle. 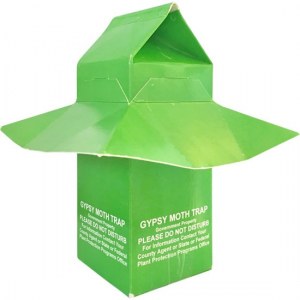 Trapping of the male moths will provide ongoing control of this pest once the spray has been applied and the caterpillars become moths. One supplier for the Lymantria dispar dispar pheromene traps is Natural Insect Control (www.naturalinsectcontrol.com) in the Niagara Region. This company supplies many of the retail shops (garden centres, etc.). The traps are treated cardboard with a pheromene lure placed inside and are easy to assemble. They should be placed outside by the beginning of July for when the moths appear.

Egg masses appear on trees starting in August and should be scraped off into soapy water and left to sit for 24 hours.  This can be done throughout the months from August to April prior to hatching the following spring.