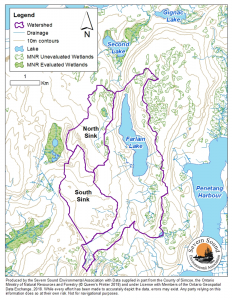 Farlain Lake is a kettle lake that was formed during the last glacial period. It is unique in that it has no surface discharge, classifying it as a seepage kettle lake. The lake is mainly groundwater fed and is in a groundwater recharge zone, with a groundwater fed tributary that flows year round into the lake. Several other tributaries flow into the lake on an intermittent basis as a result of precipitation. It is suspected that Farlain Lake slowly discharges to Second Lake via groundwater flow. Not having an outlet can lead to high water levels in years with greater than average precipitation, while steady groundwater inputs prevent abnormally low water levels in years with less precipitation.

The following information is drawn from a report prepared by Aisha Chiandet, Water Scientist at the Severn Sound Environmental Association (SSEA), and shared with the FLCA and Tiny Township.  To read the full report, go to www.severnsound.ca/resources/reports-publications.

Water levels at Farlain Lake have risen steadily over the past 4 years, with a substantial increase from 2015 to 2016. Higher water levels are of particular concern to shoreline property owners and particularly those on lower lying properties around the east and south shorelines who have experienced flooding over the past few years.

Lake water levels are determined by the balance of water inputs and outputs. For Farlain Lake, inputs include precipitation, inflowing tributaries and groundwater, and surface runoff. Outputs include evapotranspiration by plants, evaporation from the lake’s surface, and discharge via groundwater. Changes in precipitation and timing/intensity of snow melt may have a large impact on water levels in the lake, especially since there is no outflow. The impact will be determined partially by the local geology/physiography, so this along with information on precipitation, and timing/intensity of snow melt are important to consider in determining possible causes of increased water levels.

Possible Factors Contributing to the Rise

The recent increases in water levels observed on Farlain Lake are likely related to changes in precipitation and snow melt. An increase in snow melt could be a result of an increase in snowfall amount and/or warmer days earlier in the season that cause the snow to melt all at once instead of over a longer period of time. Since there is no record of water levels over the entire summer season, or for a longer historical period, it is difficult to determine if the recent high water levels are related to larger precipitation events or snow melt events, or if they represent long term changes in the water levels.

The fact that there is no outlet from the lake would impact the response of the lake to precipitation/runoff/snow melt events. This impact would result in higher water levels as all the inputs are stored within the lake then slowly discharged via groundwater, the speed of which depends on local geology. Based on the local geology, it is expected that any precipitation would result in large water level increases as the lake receives runoff from a large catchment relative to the lake’s size. Due to the sandy nature of the surface geology around Farlain Lake, this runoff and shallow groundwater may flow quickly to the lake, resulting in a larger total amount of precipitation entering the lake over a shorter time period. However, the silt and clay-rich layer underlying the lake would result in slow discharge of the water from Farlain to Second Lake. Therefore, larger water level increases following precipitation would be expected as a result of the local geology. If increased precipitation events are occurring recently (precipitation events that are higher intensity or longer lasting etc.), then these may be a big contributor to the higher water levels within the lake. 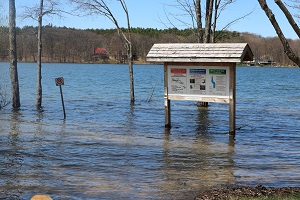 Higher water levels are of particular concern to shoreline property owners especially those on lower lying properties around the southeast and south end of the lake.

The boat launch area is at the lowest point on the lake and the most severely affected.  Shoreline property owners need to protect their septage systems.The higher levels in the water table and saturated soil in the leaching beds may pose problems with a septic system. The extra water may reduce the bed’s ability to absorb and treat wastewater from the residence/cottage. The tank and pump chambers may fill with silt and debris which would also need to be cleaned. Flooding can also cause sewage to back up into the house – if the leaching bed is flooded, use of the system should be avoided until the water has receded to prevent sand and silt from entering the tank and ending up in the leaching field. Getting well water tested before using it for cooking or drinking is also a good idea. 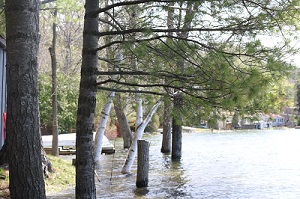 Another significant concern is the environmental impact on the shoreline, particularly die-off of vegetation along the shore as their root systems are not able to breathe.  The Gardening Knowhow web site offers advice as to what species are more water tolerant.  However these species also have very extensive root systems so care is needed where the trees are located near septic systems.

Excellent resources for property owners in managing the impact of the high water level and flooding are two publications by the Federation of Ontario Cottage Associations (FOCA) of which the FLCA is a member – they can be downloaded from the FOCA web site under Publications:  Managing Your Waterfront Property in a Changing Climate and Shoreline Owners’ Guide to Healthy Waterfronts.

What is the FLCA Doing?

All lakes evolve naturally and Farlain Lake is not the lake it was when many of us came here over 60 years ago.  So many factors are affecting it – natural evolution, climate change, the significant development that has occurred around the entire lake’s shoreline with additional ongoing development in the surrounding areas within the lake’s watershed.  Information published re the impact of climate change indicates that the swings in water levels from high’s to low’s will be more extreme and the high’s will be higher than in the past and the low’s lower.  There will be more extreme intensive storms and rainfall, shorter ice cover periods (which means a longer growing period for plants in the water like the EWM), warmer air temperatures creating warmer water temperature, and the list goes on.

Controlling the level of water in the lake through somehow facilitating drainage is extremely difficult, is dependent on a number of other organizations such as the Township, the SSEA, and various ministries, presenting major challenges:

We will continue to work with the Township and the SSEA to:

The Georgian Bay Association and Georgian Bay Forever collaborated on a three-part webinar series along with SSEA from October – December, which was attended by some of the FLCA Board members, and there will be other education opportunities.  This webinar series was recorded and is available for you to access as follows: