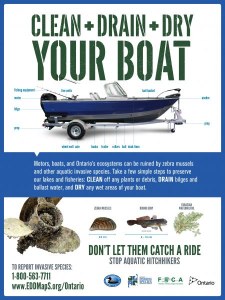 Plant and animal species are moving around the planet, assisted by increasing globalization, climate change and other human caused factors. This movement results in plants, animals and micro-organisms occurring outside their normal “native” range, where they are known as non-native species. We see the impacts of this global movement locally, species like purple loosestrife and sea lamprey originated elsewhere and have since become commonplace in North America. The problem with non-native species lies in their ability to outcompete native species, as they lack natural predators and competitors to control their populations. When non-native species spread unchecked they become invasive, and can damage the environment, the economy and human health.

Despite being a small inland lake, Farlain Lake is not immune to the effects of invasive species. As many Farlain Lake Community Association (FLCA) members are aware, an invasive aquatic plant, Eurasian watermilfoil (Myriophyllum spicatum), has become prolific in portions of Farlain Lake. Eurasian watermilfoil’s dense growth is threatening the lake’s native wildlife, hindering recreational use and reducing the aesthetic appeal of affected regions. For more information re how we are dealing with the EWM please click here.

Eurasian watermilfoil isn’t the only invasive species that should be on the radar of Farlain Lake users. Invasive fish, plants and aquatic invertebrates also have the potential to enter the Farlain Lake area.  The European Gypsy Moth is another invasive species which has wreaked havoc on our beautiful trees for the past few years.  Please click here for more info and how we are trying to manage the invasion.

Preventing the introduction of invasive species is critical:

The Severn Sound Environmental Association (SSEA) is piloting an Invasive Species Program. This program will coordinate invasive species mapping, monitoring and control programs in the Severn Sound watershed (including Farlain Lake), and ultimately produce an Invasive Species Strategy for the area. SSEA will support and work with a variety of partners, including the FLCA, to prevent and manage invasive species.

If invasive species are found, the sightings can be reported to SSEA by calling 705-527-5166; a staff member will confirm the identification and file a report. More information about invasive species and how to help prevent their spread can be found on the SSEA website: www.severnsound.ca.

See the FOCA web site at https://foca.on.ca/invasive-species-guide/ to download the Shoreline Owners Guide to Invasive Species.